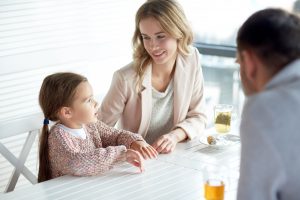 Attorney Rosanne Klovee is a child custody lawyer serving Woburm, Stoneham and Wakefield Massachusetts areas. Pursuant to divorce law in Massachusetts, shared legal custody is defined as the “continued mutual responsibility and involvement by both parents in major decisions regarding the child’s welfare including matthttps://www.kloveelaw.com/divorce-lawyer-stoneham-ma/ers of  . . . medical care and emotional, moral and religious development.” Despite this definition, parties frequently litigate custody cases over how it applies in real life.

With respect to the issuance of temporary orders in a divorce and/or parenting case where the parties are married, the court (almost always) orders that parents share legal custody unless that arrangement is not in the best interests of the children.

Note: The courts apply a different standard in legal custody proceedings where the parents are unmarried. In these cases, the court orders shared legal custody only if the parties sufficiently demonstrate that they “have successfully exercised joint responsibility for the child” well before any court proceedings began. The court must find that the parties can effectively and peacefully communicate with each other regarding the children and their best interests.

In legal custody proceedings, a common issue continually presented to courts deals with a parent’s rights to access the children’s medical and educational records. Regardless of whether shared or sole legal custody is appropriate in any given situation, one parent  “shall not negate or impede the ability of the non-custodial parent to have access to the academic, medical, hospital or other health records of the child” unless there is a specific threat to the child’s best interests.

While the children’s religious upbringing well as decisions related to the medical treatment of children are both “resolved” in legal custody proceedings, decisions regarding the children’s education (and future plans for education) are dealt with in physical custody proceedings. Specifically, children attend school – typically – in the district of the address of the parent with primary physical custody.

In reality, parents do share physical custody, just not in equal amounts. Therefore, courts almost always assign one parent as the “primary custodial parent,” and the other parent as secondary. Moreover, courts rarely order that one party has sole physical custody.

Courts have broad discretion in determining custody matters. Good judges decide each case on its merits with the goal of acting in the best interests of the children. The court looks at many factors in reaching its decision, including which parent served as the children’s primary caregiver prior to the custody proceedings.

Parenting custody orders may be modified upon the requisite showings.

Attorney Rosanne Klovee has years of experience helping her clients with child custody matters. She fiercely advocates on behalf of her clients; and her practice specializes in all areas of child custody law, including the following:

Kind, calm and intelligent…but no push over! Rosanne handled my divorce about 6 years ago, and I will tell you, it was not an easy one! Throughout the process, she was always calm, even when I wasn’t. Having gone through something so emotional, and having an attorney who was intelligent, kind, and excellent at what they do was priceless! Never did I feel I had to worry about the outcome, as Rosanne always explained the process and had my best interest in sight. Unfortunately, there were issues that persisted for several years. She never gave up on me. Rosanne made a difficult time for me, much easier.
I would truly recommend hiring her for your needs and don’t mind speaking to anyone to vouch for her abilities.